In surgery for developmental dysplasia of the hip, proper patient selection is crucial. Pelvic or periacetabular osteotomy should be considered in young patients with retainedcartilage space on radiographs. Total hip arthroplasty still is often required for patients with symptomatic arthritis secondary to dysplasia. The complexity of the reconstruction is influenced by the degree of anatomical abnormality (Fig. 3-71). The classification of Crowe et al. has been used to describe the degree of dysplasia and is based on the magnitude of proximal femoral migration relative to the acetabulum as measured on an anteroposterior radiograph of the pelvis. The migration is calculated by measuring the vertical distance between the interteardrop line and the medial head-neck junction of theinvolved hip. The degree of subluxation is the ratio of this distance to the vertical diameter of the opposite femoral head.

If the distance from the medial head-neck junction to the interteardrop line is half the vertical diameter of the opposite femoral head, the degree of subluxation is 50%. In patients in whom the opposite femoral head also is deformed, the vertical diameter of the femoral head is estimated as 20% of the height of the entire pelvis as measured from the top of the iliac crest to the bottom of the ischial tuberosities. Dysplastic hips are classified by the amount of subluxation: type I, less than 50%; type II, 50% to 75%; type III, 75% to 100%; and type IV, greater than 100% subluxation. In addition to the proximal migration of the femur, several deformities of the bone and soft tissues are of surgical importance. The femoral head is small and deformed; the femoral neck is narrow and short, with varying but often marked anteversion. The greater trochanter usually is small and often located posteriorly. The femoral canal is narrow; Dunn and Hess found its average width 2 cm inferior to the lesser trochanter to be only 1.5 cm. The narrowness of the femur and the increased anterior bowing of the proximal third make canal preparation difficult. If the femoral head has subluxated and migrated proximally, the acetabulum is oblong and its roof is eroded. In high and intermediate dislocations, the impingement of the femoral head on the ilium stimulates the formation of a false acetabulum that usually is not deep or wide enough for containment of the cup. The thickest bone available usually is in the true acetabulum, and the cup should be implanted there if possible (Fig. 3-72). 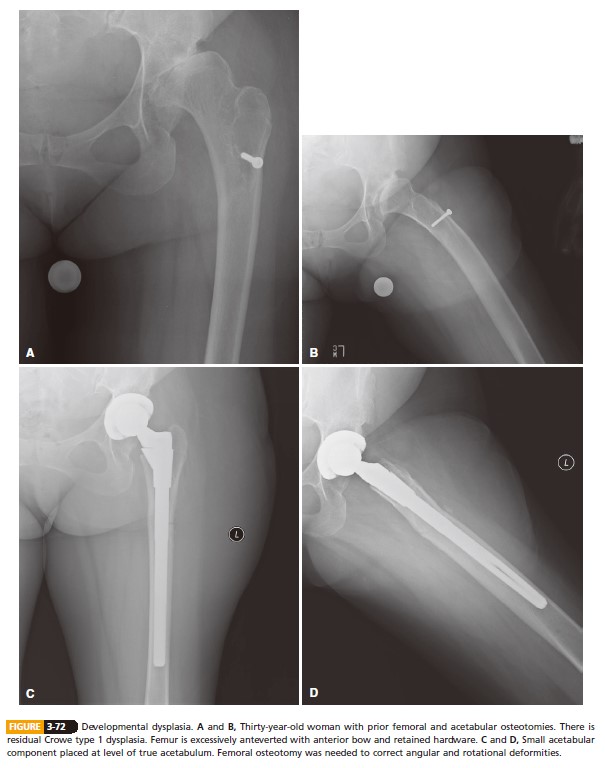 Next: Bone structure of knee joint-femur