■ Select a distal femoral allograft of appropriate size to fill the defect. Shape the condylar portion of the graft with reamers so that the size of the graft is approximately 2 mm larger than the defect. Fashion the graft in the shape of an inverted 7.

■ Secure the graft to the ilium with multiple screws or a plate. Place the screws in a staggered fashion, and tap the drill holes to avoid fracturing the graft (Fig. 3-161B).

■ Ream the graft and remaining portions of the acetabulumwith standard acetabular reamers to a size that leaves the anterior and posterior columns intact, while maximizing contact for bone ingrowth for the revision prosthesis (Fig. 3-161C).

■ Impact the acetabular component in the appropriate position and fix it to the host bone with multiple screws. 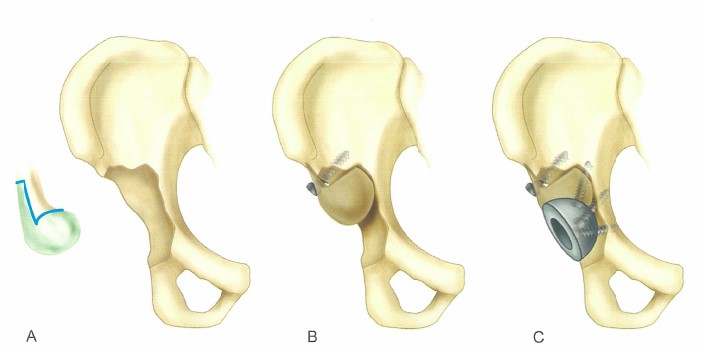 A, Distal femoral allograft is shaped to resemble numeral 7.

B, Graft is shaped to fit acetabular deficiency and fixed as shown , with several screws placed above acetabulum through remaining cortical portion of graft.

C, Graft is reamed, and revision component is implanted.

Next: Treatment of Acetabular Segmental Deficits (3)