The hip joint is the largest and most stable club and socket joint in the human body. Under normal circumstances, the hip joint can safely transmit loads and move flexibly. Today joint prosthesis manufacturer will introduce to you the mechanical analysis of the hip joint.

1. When standing on both feet

When standing still with both feet, the hip joints support the head, torso, and upper limbs, and bear about 62% of the body weight. At this time, the center of gravity is located on the mid-sagittal plane and the horizontal plane of the T10 and 11 intervertebral discs, and the vertical line of the center of gravity just intersects at the midpoint of the line of rotation centers of the bilateral femoral heads.

If the hip support is symmetrical, then each hip joint bears 31% of the body weight. Taking a weight of 60kg as an example, the two sides bear a total of 37.2kg and each side bears 18.6kg. If the weight-bearing area of each femoral head is 12c㎡, the femoral head bears a force of 1.55kg per square centimeter.

2. When standing on one foot

When standing still on one foot, the load-bearing hip joint supports the head, trunk, bilateral upper limbs, and contralateral lower limbs, and approximately 81% of the body weight. At this time, the center of gravity moves down to the plane of the intervertebral disc between L3 and L4 on the horizontal plane, and moves 2.5cm to the weight-bearing side on the coronal plane, and is located in the sagittal plane near the coronal plane of the rotation center of the hip joint on the bearing side.

Standing on one foot makes the hip joint on the load side eccentrically stressed and the pelvis tilts. In order to keep the hip joint stable, the abductor force M must be balanced. The moment arm of force K is about 3 times that of the M moment arm, so the resultant force R is about 3 times more than the total weight. The force line of the resultant force R intersects the force line of the force K and M at a point and passes through the center of the femoral head. The inclination angle of the line of force of the normal hip joint R relative to the vertical line of the ground is about 16°. 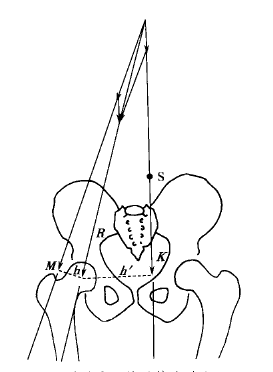 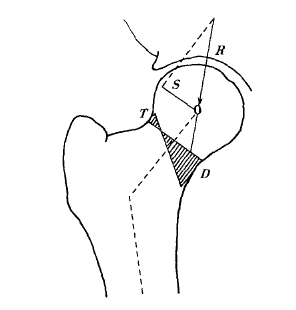 Changes in joint anatomy caused by surgery or disease can lead to changes in the contact surface and contact force, thereby affecting the mechanical condition of the hip joint. Changes in joint geometry affect muscle strength and the ability to generate torque.

A is normal; B is the centralization of the femoral head; C greater tuberosity shifted laterally and distally.

Next: Surgery Indications for DAA THA